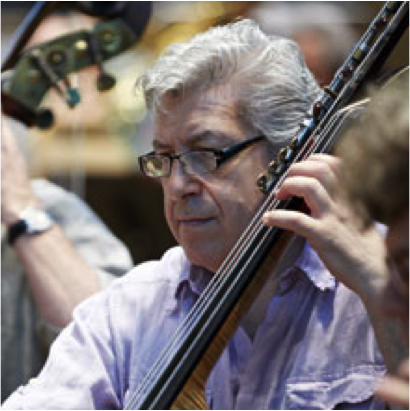 Colin Paris, started his musical life as a cellist and then went on to study the double bass with Thomas Martin at the Guildhall School of Music and Drama. Whilst in the final year of his studies, he was offered a position with the Bournemouth Symphony Orchestra, with whom he played for two years. He later went on to play with the BBC Concert Orchestra and free-lanced with the major symphony and chamber orchestras in London, including holding the position of Principal Bass with the London Bach Orchestra.
In 1983 Colin was appointed Sub-Principal with the orchestra of English National Opera where he remained until joining the London Symphony Orchestra in 1988, where he is currently Co-Principal. Colin was a member of the LSO Board for 14 years and held the position of Vice Chairman for the majority of that time. As well as sitting Principal with the LSO, Colin has been invited to appear as Guest Principal double bass with the BBC Symphony Orchestra, English National Opera Orchestra and the Royal Philharmonic Orchestra.
Colin has performed with many jazz and chamber music ensembles both in Britain and abroad, including a performance of The Trout Quintet with the Nikolay Znaider and the LSO Chamber Ensemble at the Barbican Centre, and a duet with American Grammy-winning Jazz bassist John Patitucci at LSO St Lukes. He has extensive experience working with young bass players and has given orchestral masterclasses in this country, America, Sardinia, Japan and Australia.
Colin is a Professor at the Guildhall School of Music and Drama and a Mentor at the Royal Academy of Music.

This website uses cookies to improve your experience while you navigate through the website. Out of these, the cookies that are categorized as necessary are stored on your browser as they are essential for the working of basic functionalities of the website. We also use third-party cookies that help us analyze and understand how you use this website. These cookies will be stored in your browser only with your consent. You also have the option to opt-out of these cookies. But opting out of some of these cookies may affect your browsing experience.
Necessary Sempre abilitato
Necessary cookies are absolutely essential for the website to function properly. This category only includes cookies that ensures basic functionalities and security features of the website. These cookies do not store any personal information.
Non-necessary
Any cookies that may not be particularly necessary for the website to function and is used specifically to collect user personal data via analytics, ads, other embedded contents are termed as non-necessary cookies. It is mandatory to procure user consent prior to running these cookies on your website.
ACCETTA E SALVA